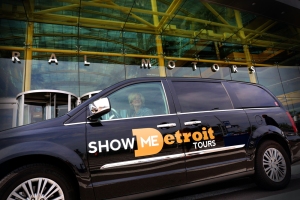 A shout-out to CBS Detroit for its new list of “Detroit’s Best Guided Tours (Even For Locals)”.

“When it comes to high-profile cities, Detroit is near the top of the charts when concerning land mass. In fact, just within the 143 square miles that officially make up Motown’s city limits, you could fit the complete cities of Boston, San Francisco and Manhattan all neatly within its borders. It’s safe to say that it would take a lot of time and effort to get all that ground covered to see the best sites that the The Motor City has to offer.  Here are some of Detroit’s best guided tours that could benefit anyone, from the wayward visitor to a longtime resident.”

Show Me Detroit Tours is on top of the list!  Here’s what they say about us:

“Wildly popular travel website TripAdvisor rated this downtown Detroit touring business as the No. 1 attraction in all of Detroit. One wonderful aspect of these fine tours is that they never stop, running throughout the year, all year along. Join these well-advised guides as they chauffeur you around in a private van service to get you all of the secrets and hidden knowledge concerning one of the most fascinating cities in the Midwest. Prices are $59 per adult, with discounts for students and seniors (includes pick-up and drop-off downtown).”

To read all of our guests’s reviews, click the TripAdvisor icon below.

Whether your a local or planning to visit, get in touch with Show Me Detroit Tours for an up-close look at the “pretty and the gritty” of the Greater Downtown community. For details call 313.444.2120. 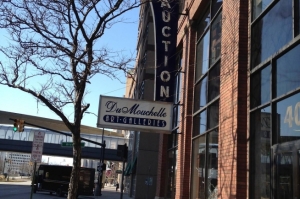 From the Core Detroit blog:

“If you’ve spent any time strolling around [Detroit’s] Bricktown, you may have spotted the curious establishment hidden in plain view on Jefferson Ave. Through the floor-to-ceiling windows on the first floor of a mid-rise, red brick building, you can spot stacks of vintage-looking furniture, decorations and a seemingly random collections of odd trinkets.
What is all that stuff? Did it come from the collection of a lavish European palace? Or are they the leftovers from a neighbors garage sale? It’s tough to tell without stepping inside.

The contents of the shop are so intriguing that it’s easy to look right past the simple blue and white sign: “DuMouchelle” scrawled in a curvy typeface with “Art Galleries” printed plainly underneath, and above it, “Auctions.”

DuMouchelle has been doing appraisals and estate auctions since 1927, when it was founded by Joseph DuMouchelle. It’s currently run by Lawrence and Ernest DuMouchelle, the president and vice president respectively. The company is the largest and most prestigious auction house in the Midwest, according to PBS. [Lawrence is a frequent Antiques Roadshow appraiser, and the company is oftentimes called on for an assessment in the Detroit News weekly “Trash or Treasure” column.]

The place is bigger than it looks from the outside, and is absolutely stacked with vintage and antique furniture, paintings, crystal, jewelry and more. You could easily spend hours wandering around, perusing the sea of rare and unusual finds. You might find yourself drooling over a jewel-encrusted Judith Leiber clutch, or trying to figure out where you’d put that enormous bronze statue of a horse. To be clear, DuMouchelle is not the kind of place where you’ll find the leftovers from a spring cleaning garage purge. They specialize in authentic antiques and rare, exceptional collections.

Once a month, DuMouchelle auctions off individual pieces or sets of items (say a collection of dishware) called “lots.” They have a retail shop as well, but the live auction is where the really exciting stuff happens.

So how does that work exactly?

A few days before a live auction, DuMouchelle hosts a preview where you can stop by and check out the lots up for auction in person. You can pre-bid on a lot online, or just show up the day of the auction. The live auctions usually span a few days, with different lots being auctioned each day.

You can also bid live over the phone or online. They’re not always dramatic scenes of feverish bidding and it’s a lot more exciting if you have some skin in the game, but it’s pretty cool to watch even if you don’t have your eye on a particular piece. Some serious collectors stop by these auctions.

Want to see for yourself?

DuMouchelle has an auction coming up, with previews running from Jan. 9-16. The auction itself begins on Jan. 16 and will continue through Jan. 18. Just a few of the items up for bid are a Ty Cobb autographed dinner menu (from an event celebrating his 20 years with the Tigers), an elaborately carved Italian setee (that’s a sofa), and a mahogany grandfather clock by Howard Miller. Visit their website for times and to preview the lots online.”

Stop in when you’re in Downtown Detroit.  They’re located at 409 E Jefferson Ave. directly across from the GM Ren Cen.  Be sure to ask about their appraisals.

22 Photos That Show Why Detroiters Love Their City 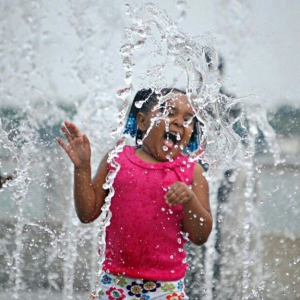 2. It’s a place where abandoned buildings and possessions can be transformed into gold.

4. And Detroiters have the strength to make them reality.

5. It seems everyday a new business proudly states it’s “Made in Detroit.”

6. Like this company [Branded By Detroit] that produced these D-town neighborhood signs out of wood from old Detroit houses.

7. Eastern Market and local restaurants have made the city a foodie heaven.

8. So many organizations and individuals have dedicated themselves to improving the health and welfare of the city.

9. And the city has grown as a result.

10. Detroiters have a great sense of humor.

11. And our sports stars are very down-to-earth.

13. The Detroit Institute of Arts is probably the most underrated museum in the United States.

14. The People Mover might be kind of useless, but it sure is pretty.

15. The Light Tunnel makes transferring between terminals at Detroit Airport like swimming in an ocean of sound.

16. The riverside fountains make everyone a kid again in summer.

17. But winter in Detroit ain’t all that bad either.

18. Is there any place more beautiful than Woodward Avenue during Christmas?

19. If things get a little too cold, there’s always the warmth of a show downtown.

20. Buildings like The Detroit Masonic Temple are beautiful, but they can also turn up.

21. It’s true that Detroit has faced struggles, but the city is unbelievably resilient.

22. Because Detroit is a city that will never give up.